Love free books? Here's a novelette for you! Get it Now
You are here: Home / Category #3 / Restored Grace / The Pastor in Chrisitan Romantic Suspense 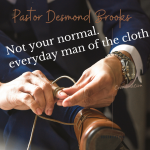 Christian Romantic Suspense novel, Restored Grace’s Pastor Desmond Brooks is distinctive to each person he serves. He’s not one-sized fits all, but in some ways, he has the same answer for everyone’s problems. Though he’s not quick to offer a solution.

In Carol’s case, he’s not the daring, courageous hero that he was in Shattered Guilt. But his quiet thoughtful care for her draws her to a new faith in God.

As authors, we’re often told not to be “too preachy.” For me, when writing Christian Romantic Suspense that’s a bit difficult when I want to give the Lord glory for everything. I daily recognize what a sinner I am, and never cease to be humbled that through the blood of Jesus, I am a saint. There I go! Seriously, I want to tell a good story. After all, I believe God is the father of all inspiration. But how do you write about a heroic, godly, pastor and not be preachy? I hope I’ve struck a balance in the Bay Town Series.

Is it Romantic Suspense that makes up our favorite Pastor?

Let’s hope he’s more than that! Three key factors strike a personality note with our fictional Pastor of Bay Town. He’s empathetic, he’s humble and he’s unique. I can hear you already. Aren’t those traits of all pastors? Sometimes, and in Chrisitan Romantic Suspense novels, we can take it as far as we like

He Has the Ability to Understand the Feelings of Another

Although Pastor Brooks is a somewhat minor character in Restored Grace, Carol depends on him, and he’s always there for her. I recently attended a bible conference and one of my favorite Pastors spoke. Pastor Burke Parsons. If you want to hear about a wild, unique past, read this interview!

Anyway, Pastor Parsons was a bit younger, though no less wise than the others. But his countenance was quieter and more subdued. I sensed pain, though not unresolved angst. When he spoke, I felt that he was speaking to me, not at me. That he knew exactly what I experienced. And yet, I knew that he was reaching everyone in the same way, because he empathized with our universal plight. We weren’t created for this world. Like Pastor Burke, Bay Town’s Pastor Desmond Brooks contends the same with Carol. She’s in need of the Savior’s love, and he feels her pain, relates to her past, and offers her hope, by leading her to the foot of the cross.

Sometimes I think empathy is lacking in some Christian Romantic Suspense novels. Definitely not all, but it’s easy to get caught up in the action, tension, and drama … after all that’s what drives the plot! But I love to read when a character feels and understands deeply. The depth of this trait is explored much more fully in Shattered Guilt, where Pastor Desmond is the main character, but still, Carol benefits from his empathetic virtue.

Humility is Your Friend

That title is coined by my husband. I have boys who played Varsity High School Baseball and went on to play College Baseball, even playing in the College World Series three times. One son even won a Golden Glove, only the second won in the history of his University. The other son came one home run short of tying the University’s Hall of Fame. See why my husband coined the phrase? Especially in the ministry, humility must be your friend.

Pastor Brooks displays a quiet meekness probably more so in his lack of arrogance and pride. In his past life, he learned the hard way, suffering great loss. It’s something Carol knows nothing about, but it’s because of that experience, that his quiet humble strength causes her to trust him, thereby having the courage to trust our loving, forgiving God.

Unique? But Everyone Has a Story

Right. Everyone does, so how is Pastor Desmond Brooks different? Our Chrisitan Fiction Romantic Suspense pastor is a hero. A genuine hero. If you read Book One Shattered Guilt, you’ll really get a sense of how. Between him and Melanie, they pretty much …. Oh wait, that’s what they call a spoiler.

I’ll suffice to say that in his former life, before becoming a pastor, before moving to Bay Town, Pastor Brooks was a Navy Seal, and married. How’s that for unique? I’m thankful for my husband’s crucial advice to me that this pastor needed to have a specialized past to display the courage to perform the tasks that he did in Shattered Guilt. Although he’s not the main character in Restored Grace, he displays heroic actions nonetheless.

Pastor Brook’s depth of understanding and compassion goes deep, and that needs to come from somewhere, much like Jesus’ suffering made Him akin to ours. Therefore, he’s experienced tragedy in his past, and sadly, he suffered from the death of his first wife.

More to the Man

To be honest, when creating Pastor Desmond Brooks, I didn’t have anyone in mind. Nobody other than an extremely handsome romance figure to Melanie Thompson, the main character in Shattered Guilt. But then again, I knew nothing about writing or creating characters. But that was ten years ago, and like me, Pastor Brooks has evolved! I knew I wanted him to be a good Pastor…too good so I was told by my first editor. She’s the one who taught me that everyone has flaws, even our heroes. And perhaps it’s the flaws that make one effective in any service to God, so long as it’s surrendered, and a person is pliable.

Because Pastor Brooks plays the role of pastor, counselor, and friend to Carol, you won’t experience his daring prowess, but I hope you’ll appreciate his godly wisdom nonetheless.

A funny note. An author friend said she likes to pick actors who represent what her characters look like. When I posted an actor that I thought of as I created Pastor Desmond Brooks, the comments were quite amusing. One of my Street Team Members said, “Wowza! I thought he’d be older and not so …” Another posted happy faces and wrote, “That’s how I pictured him.” What do you think a pastor in a Christian Romantic Suspense novel would look like?

If you have a Pastor that’s encouraged you, listened to you, and guided you, please let him know. It’s quite the fashion to bash Christians, and men in ministry these days, and perhaps some need to be called out, but I prefer to read and write about godly men whom God has called. Men who have been faithful to that calling. I’ve been fortunate to know and appreciate many, and I think I’ll let them know right now! If you haven’t read Cathy Gohlke’s book, Night Bird Calling, give it a read. She beautifully crafts a pastor in a difficult congregation. I love the portrayal.

Once again, don’t forget to enter the drawing for a paperback copy of Restored Grace and a $25 Amazon Gift Card. Just click the link below. You can enter once each day.

I hope you’ll set aside some time tomorrow and sit with me as you meet Carol’s romantic interest, Mayor John Taylor, inspired by our former local hometown mayor!

By subscribing to our newsletter, you consent to receive new post updates and occasional promotional emails related to our company.